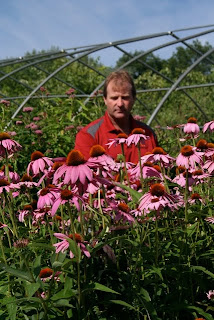 ...Crazy for Coneflowers, that is. Echinaceas are pretty much irresistable, and they're in full bloom right now, both in the display beds and those in containers. We're out of a few varieties in cone-tainers right now, but we'll have more next spring. We do have lots of big, strong 'Magnus' echinaceas, as you can see in this photo of the nursery operator watching for butterflies. 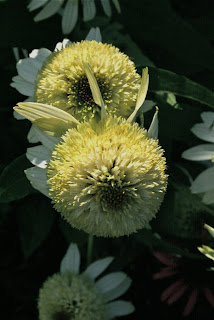 Echinaceas like full sun and good drainage, but also need plenty of moisture while they're developing. Once established they're fairly drought tolerant, harkening back to their ancestry as prairie plants. Though no prairie ever saw anything like the doubles, including 'Coconut Lime'. Here's Coconut Lime just starting out; you can see the double centre starting to fill out. It holds its green colour quite well until the flowers are quite mature, then it lightens to a greenish-yellow centre with white ray florets. 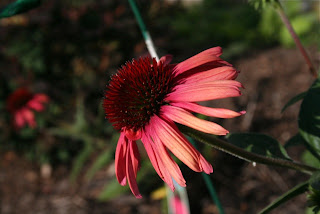 We carry a number of the 'Big Sky' series of cones, including 'Summer Sky', which was the first bicolour-rayed cone to be developed by the people at Itsaul Plants, home of the Big Sky series. 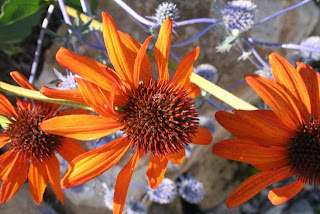 Want something that sizzles with the summer heat? 'Tiki Torch' is a brilliant orange, and works especially nicely with something complementary like the blue sea holly (Eryngium planum) in the background. 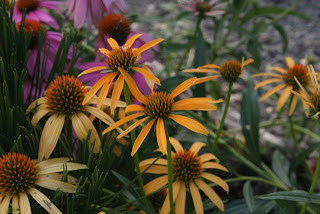 We were pleasantly surprised to discover that 'Mango Meadowbrite' echinacea came through another winter. Like others, we have found the 'Meadowbrite' series not particularly hardy here, but this one is doing very well. We haven't found any good explanation for why the Meadowbrites are cranky here, unless they prefer a winter that gets cold and stays cold, like winters do in Chicago, where they were developed. 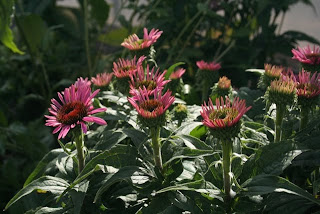 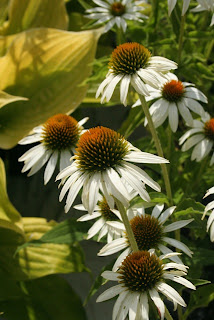 For those who like white cones, we have both 'Fragrant Angel' and 'White Swan', which offer a nice cooling effect to a bed brimming with hotter-coloured echinaceas. 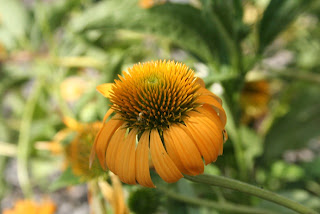 We don't know about you, but when we see this one, we can hear Neil Young strumming his guitar and singing this variety's name...'Harvest Moon'. It holds its rich gold colour quite well, and flexes its petals back as you see here. 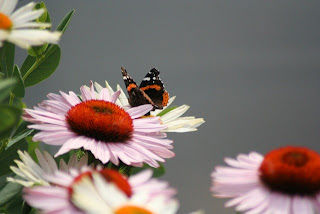 A red emperor butterfly lands on a white coneflower that is hiding behind 'Hope', the palest-pink of all the coneflowers. Echinaceas are terrific for enticing butterflies and bees to your garden, and excellent for later-season colour. When planting newly acquired cones, however, do yourself a favour: even though it's hard to do, cut off the flower buds. The plant will put its energy into developing new roots and leaves, which are crucial for getting it through that first winter. You may let your new coneflowers bloom later in the season; they will thank you for having given them that little extra attention at planting time, and you should have echinaceas for years to come.
at 3:13 PM