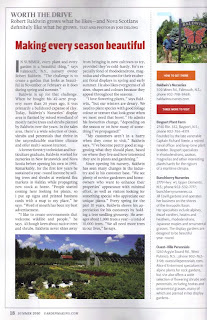 Gee, this is exciting! Baldwin Nurseries has been written up in the summer issue of the brand new Garden Making magazine. Some writer named Jodi DeLong wrote a piece about the nursery. If you're not acquainted with Garden Making magazine, it's a great read: all about "inspiring and informing Canada's gardeners", just as a gardening magazine should be!